Creative expression through the written word

So, this is a pretty rare occurrence but my husband and I had no plans and a free Saturday night. To top it off he kids took the car so we were stuck at home. We decided it was A Netflix and chill night.

We got in our PJ’s, curled up on the couch and the movie selection began. We decided to rotate who got to pick what we watched. That way we could balance it out and both be happy with what we watched.

All of the movies we watched were radically different but then again we like to explore our options and keep an open mind about things. I can count on my hand the number of times we have decided we “just couldn’t finish” a movie.

Here are the movies we watched:

We like to discuss movies after the fact, you know, What would you do if?, Can you imagine?, I would have done…, I didn’t like that character because… and so on. Sometimes we just talk about the plot twists and what surprises us or was a given. We have a lot of fun and the hours of alone time, cuddling on the couch isn’t that bad either.

I highly recommend, even when you live a hectic lifestyle, to make time for a Netflix and chillin night. It was relaxing and it gave us a chance to reconnect. So, get our computer, tablets, smartphones, smart televisions or whatever and get a queue going.

I’ve heard people say that sitting at a desk working on a computer all day “isn’t real work”. (I would love to have them do my job for a day.) To them work is only work if it involves physical labor. If that is the case someone needs to tell my tired brain that at the end of a work day. I gotta tell you…at the end of a long work day I often feel like my mental processes are ready to take a back seat. Often I just want to veg out and not really think about anything, like what to cook for dinner or household chores that need done. That’s what weekends are for right?

On the flip side, my husband works a very physical, hard labor job and when he comes home he is exhausted. His body often aches and it’s all he can do to keep his eyes open. (Or, worse…he’s suffering from insomnia and can’t sleep no matter how tired he is). He often spends Saturday sleeping off and on all day to try and catch up on his sleep leaving Sunday’s as our only real day together where we are both feeling at our optimal.

It kind of sucks.

It definitely makes it hard to stay focused on each other. So….even though my hubby is curled up on the couch sleeping….I’m curled up close to him reading, writing, watching movies and simply enjoying his presence next to me. I guess in its is way this is a truly relaxing weekend. Would I rather be out doing something enjoying the sunshine? Yes, but I wouldn’t give up this time with him for anything. 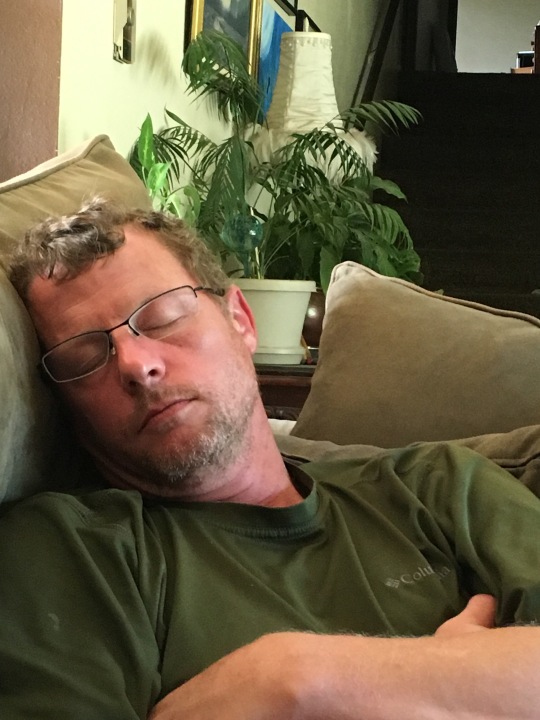